A Media Revolution: the iPod

Note: this Trender Post was original posted by Ben Preston and is being reposted here.

It is clear to see that the iPod has been dominating the electronic world ever since it was released. The iPod wiped the portable CD player off the face of the earth within weeks of its introduction into the market and made all other MP3s obsolete. We have come a long way from the thick black and white screen from the first generation iPod that was released on October 23, 2001. The first generation of iPod gave birth to an iPod frenzy. Cars are now iPod compatible, the iPhone is sweeping the business world and the iPod nanos and shuffles are becoming the hottest item for runners, bikers and hikers. It is merely impossible to search through any college, high school or junior high school campus and find ten students without some version of the iPod. The iPod became the largest selling digital music player of all time after selling its one hundred millionth iPod on April 9, 2007. But why not, the brilliant picture quality and the notorious iPod click wheel almost seem to pull you in like some sort of magnetic field. Apples booming sales proves that the average American will always have the desire to tote along the newest technology, whether it is the hottest phone, sleekest laptop or above all the newest iPod. In January 2007 Apple reported record quarterly revenue at 7.1 billion dollars, of which 48% was made from iPod sales. These numbers are crippling to competitors such as the Rio which before the iPod had always been on the top of the food chain in the MP3 department, but now is only second best. Competitors are having a hard time finding a way to best Apple because lowering the price and increasing capacity has already proven to be unsuccessful. 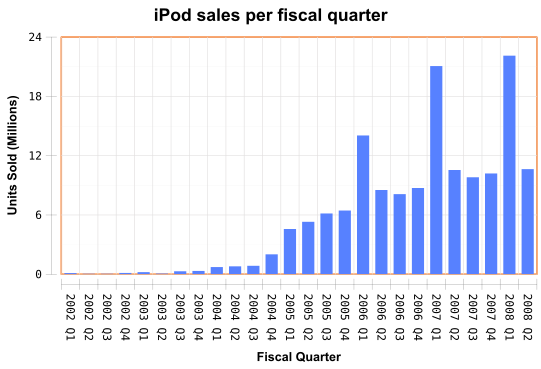 Apple has created a device that has found a way into everyday life. It has become a thing of stature as well as a window into music that you haven’t heard in years. It has created a new found obsession with music. Everything about the whole iPod experience is so appealing that you just can’t imagine living without one. The iPod device is nothing without the package that comes with it. The long list of accessories gives consumers a chance to get the most out of their iPod. The extensive iTunes music store gives you what seems like an infinite amount of music choices and the always rewarding discovery of upcoming bands. iTunes gave the iPod its success.

My good friend from Boston College always has some money to fall back on because of the success of his band (Gerard Mellen) which he put up on iTunes for music sales. Also, businesses have been taking advantage of the Podcast for informational videos. With every new generation of iPod comes more and more advantages. I could list benefits from the new iPhone that would stretch for miles. But how did Apple make such an ingenious product? Did they have any idea that it would explode into a global domination of the electronic world? What makes the iPod superior to MP3’s that on paper seem like the better product? Maybe even the folks at Apple can’t answer why the iPod phenomena started.

The people at Apple have just been making products that they want for themselves. Is this simple thinking the key to Apples success? How did the iPod take over the music listening device product line even after MP3’s were already being circulated throughout America? Fortune Magazine senior editor Betsy Morris interviewed Steve Jobs on the success of his business. "When we created the iTunes Music Store, we thought it would be great to be able to buy music electronically, not because we had plans to redefine the music industry.” However, revolutionize he did. Steve Jobs couldn’t even project the kind of numbers that Apple has put up over the past few years. He credits the success of his business not on the products that Apple has produced but the discipline that Apple has not to produce many other products. "Apple is a $30 billion company, yet we've got less than 30 major products. I don't know if that's ever been done before. Certainly the great consumer electronics companies of the past had thousands of products. We tend to focus much more. People think focus means saying yes to the thing you've got to focus on. But that's not what it means at all. It means saying no to the hundred other good ideas that there are. You have to pick carefully.”

The iPod has completely redefined the music industry and crushed all competition. Dr. Michael Bull, an iPod specialist and researcher, interviewed thousands of people to get information about their satisfaction with their iPod. Most of the two thousand responses were all beaming with positive aspects of the iPod. The few minor negative aspects such as fear of theft and battery life make the iPod seem almost flawless. Journalists from all over are wondering the same thing, how was the iPod so successful. Even Apple is asking themselves this question. Maybe it’s Steve Jobs, the guru behind the apple operation. Or maybe it was just the right product at the right time. There could be many reasons to Apples success or it could just be one. However, America’s main focus is not “how did the iPod become so successful?” America’s main question that they have for Apple is “When is the next iPod coming out?”