Well, I finally was able to overcome a major technical glitch with my new BlackBerry Storm (sorry RIM), and was able to retrieve about half of the videos and images I took at CES. The other half were corrupted and came back with an error message: "Error Playing- the media being played is of an unsupported format" (notice the very proper sentence structure of our more civilized neighbors to the North) which is ironic since they were all taken with the Storm. That, plus the fact that it took me a day to organize all of my notes and the press kits I received, not to mention to recover some of the life force that is always stolen at big trade shows like this, and you will understand why I am tardy in my posts. So I begin my debrief on CES on a light-hearted note as a way to purge the techy demons.

Robots! Everyone loves them and some, like AnyBots founder Trevor Blackwell, have been wondering why we are in the 2000s and we still don't have them helping us at home and at work. Not to fear, I saw a lot of them at CES and their capabilities, and utility, have improved vastly from what I saw just a few years back. Here is a random sampling.

One of the most popular robots to break into the mainstream of course is the Roomba from iRobot. The Roomba is a moderately priced robotic vaccum that does a pretty good job. I bought one a few years back and it was really quite something... for a little while. The problem I had was that the Roomba required too much set up to work (move the chairs; remove tasseled carpets) and required a commitment to cleaning out its small cargo capacity for dirt at least once every other day or so. This was a messy job since fine dust flew everywhere and you had to untangle string from around the roller-brush-thingy, so I would typically take it and the garbage pail outside to do the job (even less fun in the winters of Greater Boston). Although it was designed to go back to its "nest" to recharge, mine was a flunky and never quite got there. As a result, when my Roomba's rechargeable battery finally would not hold a charge anymore, this little robot collected dust in the closet and I forget about it until I saw its more robust descendants at CES last week.


I am happy to report that from what I saw, the new Roomba is much improved from my early model. It does a better job of finding its home base to recharge and has a scheduling function so you don't have to remember to push the button to get it started (you can also have it clean the floors while you and the kids are out of the house). As before, Roomba processes something like 200 commands per second, so it is very smart at getting around furniture, avoiding falls from stairs, and passing every spot on your carpet at least once (your first week with the thing is very inefficient since you will be mesmerized trying to figure out how its artificial intelligence works). But the problem of the small capacity remains, and the messiness of cleaning it out is still a huge mental obstacle to its utility.

Of course, there is a solution to this problem with the Roomba and you heard it here first folks: introducing the "Burping Roomba." Watch the Burping Roomba clean an entire floor of your house, sense when it is full, and return to its home base to regurgitate its payload into a newly design receptacle alongside the recharger (it would only have to reverse itself). I mentioned this idea to the product folks at iRobot and I was not quite sure whether they thought I was insightful or insane. I guess we will have to wait and see.

Note: iRobot now has a full product line that includes the floor washing Scooba, the Dirt Dog for pets (think lots of pet hair), the Verro for cleaning your pool, and the nightmarish Looj for cleaning your gutters. 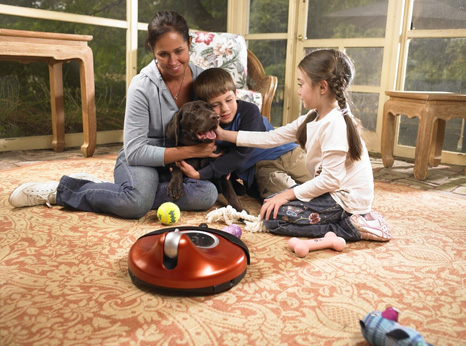 And there is the upcoming ConnectR communications robot which is almost guaranteed to add to the kids’ neuroses with Daddy being on the road all the time: “iRobot ConnectR allows you to virtually visit with family, friends, and pets any time you want. Using proprietary iRobot Virtual Visiting software, a PC, and the robot's audio and video, you can access ConnectR via the Internet and drive the robot around your home to see, hear and interact with whomever and whatever you want.” Perhaps my Burping Roomba isn’t such a bad idea after all?