Digital Foci: Time to Replace Those Old Pictures on the Walls with Digital Picture Frames 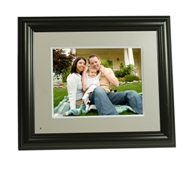 It happens just about every time I step into someone’s home or office.

“Those your kids?” I ask as I look at the frames on the wall (or desk).

“Oh no, those pictures are really old. Maggie just graduated from High School and Steven is the starting quarterback on the team.”

The conversation ends with a few puzzled looks and polite banter about how they grow so fast and how we need to put new pictures in the frames.

Come on folks. It’s time we all enter the Digital Age. Everyone now uses a dedicated digital camera or a camera phone and we are pretty much inundated with digital images that we put on FaceBook, store on flash drives, and generally don’t know what to do with. But we still let the years pass by with the most prominent displays of our affections-- the pictures of friends and family framed on our walls and desks--collecting dust. Why is that? I am not sure about the answer to that question but I do think it’s time we begin to fix this. Maybe not completely, especially in this new age of energy consciousness, but perhaps a bit at a time for our most prominent photo display areas.

There are now dozens of digital picture frame devices out there, with various capabilities at a variety of price points. One of the most complete line-ups I saw at last month’s CES was from Digital Foci.

First up for replacing the frames in our homes and offices is the Image Moments 8 digital photo frame. It is equipped with an 8-inch high-resolution 800x600 digital LCD screen with contrast ratio of 500:1. With 450 MB internal memory, Image Moments lets you store thousands of photos directly on the device. Photos can be copied directly into the internal memory from CF, SD, MS, xD memory cards or from your computer. It comes with a handy file management system for organizing, sorting, and selecting slideshows. In addition to the interchangeable mat that comes standard with 3 color selections, the Image Moments 8 has a proprietary Adapter Ring Design that supports limitless custom framing options. Image Moments 8 is priced at $159 and is available now at www.digitalfoci.com and major retailers such as www.amazon.com and www.walmart.com.

Charles Huang, Digital Foci Director of Business Development, was nice enough to take me through a full demo of Image Moments 8 (note: I take my finger off the microphone about half-way through :-) ). 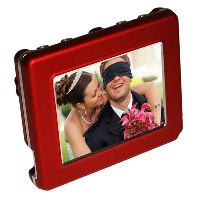 If you are looking for something smaller there is the Pocket Album Deluxe OLED 2.8 model which has a 2.8” display, holds over 4,000 digital photos in internal flash memory, has a simple thumbnail-based file management system, and boasts a contrast ratio of 10,000:1 with brightness of 200 nits (just don’t let them jump in your hair :-) ). It comes in a variety of colors and has a built in clock and calendar function. It is priced at $89 and is available at major retailers. The only downside I can see is the Pocket Album only lasts five hours on battery life, but I am pretty sure I would keep the AC power plugged in. An even more portable version of this is Digital Foci’s Pocket Album OLED 1.5. With its 1.5” screen and smaller holding capacity (about 124 photos), it works well as a keychain-type device. Like the Deluxe it also has a battery life of about five hours when turned on and can be loaded via a USB 1.1 connection to a computer (supports Vista, XP, and Mac OS; works with JPG, TIF, GIF, PNG, BMP files). It loses a bit in contrast ratio (1,000 : 1) and brightness (90 nits) but works well for its intended purpose as a keychain, a reminder of loved ones on planes/trains/automobiles, or a way to replace the gnarly, faded photos stuck in your wallet. I found it for $15-$20 at Amazon. This is a good bargain and great gift idea.

Digital Foci has a range of other products for securing, storing, and porting your digital photo files wherever and however you need. Check them out here.