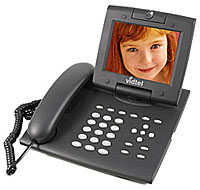 VidTel. Remember that name. You will be seeing more of it soon. Not just because it is a great brand (again, props from a marketing guy) but because I predict these video phone folks will find success in a market that has long languished despite the best efforts of some of the telecom industry giants. And they will win by keeping it simple. By not over thinking it. Let me tell you why I feel this way.

I've been in telecom and Internet services most of my career. At Nortel and then various start-ups including Unisphere/Siemens, Tundo, Netcentrex, and Espial, I saw the transition from legacy time-division-multiplexing (TDM) public networks to an embrace of Internet protocol (IP) technologies. Many of you are familiar with Vonage. Several of my fellow Trenders have Comcast's voice-over-IP (VOIP) service or a triple play FIoS package from Verizon (not quite all IP but I digress). VOIP has become mainstream. Some call it "digital voice". Some call it "internet telephony." It doesn't really matter. What matters is that it saves money for both service providers and consumers and enables a host of new features that were not possible before (unified communications, etc.).

But what most people don't know is that the original mainstream protocol for VOIP, H.323 (sorry everyday Trenders-- there will be no quiz on this one) was designed as a voice/video protocol. So what happened to the video part of the equation? Good question. The answer is practically nothing. Several players found a home in the corporate market. And there were several lame attempts to introduce a service into the consumer market (I had an inside look at Motorola's Ojo video phone project but that is also a story for another day). Sure webcams took off and found their way into YouTube and other more sordid industries, but why has there not been a mainstream video phone device and service that grandma can use? I have often asked myself this question. Like a few of you really geeky compatriots, I was one of the first to buy the BeamerTV video phone device, a very poor quality device but at least one way for grandma and grandpa to see the grandkids.

The reason I believe these previous attempts largely failed is that they were either too costly, too complex, or not marketed properly. I think VidTel has a really good chance to overcome all three of these stumbling blocks.

I met with VidTel CEO and founder Scott Wharton. He is the former VP Marketing for VoIP application server leader Broadsoft (which recently purchased competitor Sylantro in a fire-sale). We had a long chat about all of these things. I was really looking for a smoking gun to explain what didn't work in the past. We talked about equipment (VidTel is not recreating the wheel here, they are using a mature device from Grandstream). We talked about marketing (VidTel is marketing directly but also through a network of distributors and dealers, and maybe in the future as a reseller to the big service providers). We talked about user adoption. And that's when it hit me. Keep it simple. VidTel's plan is to sell a VOIP telephone service, competitive to Vonage, that also happens to include video telephony. You can turn it on and off as you like. Not quite out of the bathrobe to start your day? Keep it off. Want to see that special someone from across the sea or chat with Grandma? Turn it on. Brilliant.

And with plans starting at $14.95 a month, why not dip your feet in the pool? I mean, this is way beyond a geeky device costing $800 per unit (like Ojo). No need to set up a webcam (but Scott assures me VidTel will be interoperable with webcams and other service providers like Skype). You will be able to use a real phone number, and rather than having this off in the corner, you can run your entire home with VidTel. Oh, and you can also send and receive video mail.

Anyhow, I am sure you can sense my bias, but I really would like to see VidTel succeed. The technology for a good quality, low-cost, mainstream video phone has been around for over ten years so it is only natural that this service should be available to consumers. Scott said he will set me up on a trial. I promise to give you the low-down and let you know if my excitement is merited. Check them out at www.vidtel.com.