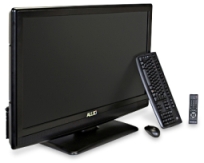 In our continuing podcast series, I had a chance to chat with Tré Cates, Silicon Mountain President and CEO. I love it when someone gets a good idea, wonders why it has not already been done, and then makes it happen. For Silicon Mountain, a manufacturer of high-performance computing systems, gaming systems, and servers, the “aha moment” came a little over a year ago— why not bake the guts of a computer into a high quality HDTV?

With clients like Lockheed Martin, Silicon Mountain had been making a good business working on custom computer systems with special requirements due to performance or space constraints. It only makes sense that they should be among the first to tackle the challenge of squeezing a high-end computer into a flat-panel HDTV. It took them a little less than a year to launch the first large-screen PC/HDTVs on the market, in 32 or 42 inch varieties, for both a super-powerful Allio “Media Center” version or the slightly less powerful Allio “Lite” version. While there are smaller PCs/monitors (with a baked in TV tuner card) on the market from folks like Apple, Sony, and Dell, Allio claims that no one else has a screen this big.

For folks that have been following our coverage of the various Internet TV devices and technologies, you might find the simplicity and power of a combo device refreshing. Or you might be horrified to bring Bill Gates (and his close friend Norton) into the comfort, simplicity, and lean-back experience of the living room. Either way, you have to hand it to Allio for putting together a product that many of you probably thought of years ago.

The big advantage for Allio, similar to ZvBox, is that because it channels the PC, anything you can get online or on your computer is now available on your HDTV without limitation. The PC control issue is solved with a wireless remote. Allio also solves a big space problem for folks not wanting to hook yet another set-top box to their TVs for DVR, DVD, Blu-Ray, or as an Internet TV and web browsing device.

The biggest challenge is that Allio customers still need to find a way to connect it to the Internet router via Ethernet or wifi. But most of the other approaches also have their drawbacks, including their own wiring (even coax sometimes) or wireless issues, content limitations, interference or range problems for media streaming/ remote control, and difficulty in transmitting hi-def among other things.

Ultimately, customers will decide for themselves how to get Hulu, PC apps, and unlimited web surfing in the living room. At least this approach they will understand, and that goes a long way in my book.

Check out the podcast here. It’s a quick listen at 13 minutes. Hear what Mr. Cates has to say about:

The flagship Allio model marries a full-HD 42” LCD display with a combo Blu-ray/DVD player, an integrated digital recorder for PVR, and a powerful PC based on the Intel Core2Duo E8400 processor, 4GB of RAM from Silicon Mountain, a 1TB hard drive and the 64-bit version of Windows Vista Home Premium. In addition to the analog and digital audio/video inputs common to high-def televisions, the Allio HDTV/PC includes wireless and wired networking capabilities and several USB ports to extend the experience to other computers and peripherals in the home. It retails for $2,399 and $2,799, respectively.

Allio can be found at Amazon, CompUSA, TigerDirect and other leading retailers.