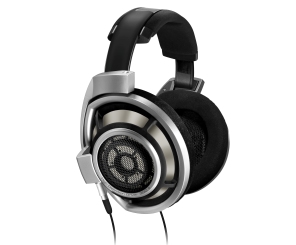 It could be Murphy’s Law of trade shows, but I was pretty disappointed with the new Sennheiser HD 800 headphone speakers. Sennheiser claims “more than 60 years of ingenious headphone engineering has been applied into the new HD 800” but unfortunately what I heard at CES just sounded awful. Sennheiser has some other products that look pretty neat, different takes on the Zagg Z.buds mentioned before, but I didn’t get a chance to take a look at them. I --and the Sennheiser booth guy at CES-- were just too embarrassed to continue after the HD 800 demo. I am not sure exactly what happened but it went a little something like this:

Me: “Umm, I am hearing a lot of background noise and fuzz. Not sure where it is coming from. Also, I am getting some significant distortion as it gets louder.”

Sennheiser Guy: “Ohh, those headphones must be defective. Try these.”

Sennheiser Guy: “Ahh, perhaps it is our music selection. Let’s change to this…”

Me: “Not really any better.”

Sennheiser Guy: (trying my HD 800s now to see for himself) “Hmmm, I see what you mean.”

Anyhow, we spent the next 10 minutes trying different music sources and headphones, and nothing improved. Apparently frustrated with me, the Sennheiser Guy moved his attention to another press person in the sound-proof room they had built into their booth— same experience. I would be happy to try again with the HD 800 or any other Sennheiser product, but at this juncture I would not advise spending $1,399.95 to experience its 6o years of engineering. I feel pretty bad about putting the new speech-enabled remote from Amulet Devices in this category but I have to be honest. I liked the guys I met from this Irish company and truly believe that at some point speech will become the future of device/media control in our homes. I also spent some time helping to launch a natural-language speech company, Personica, so I know what challenges they are facing. The beauty and power of speech recognition is that it really is the simplest and most intuitive interface for all our gadgets. The problem is that, if it does not work well enough, or pass a threshold of functionality, it just becomes another piece of digital clutter. Unfortunately, at this point, that is where Amulet Devices is.

Amulet is a new remote control that allows you to control Microsoft’s Media Center for all your media including photos, videos, and music. By holding the remote somewhat near your mouth, you can say “Play the Beatles” and it will play. You can say “Show slideshow John’s wedding” and it will work. All using simple commands.

The problem with speech recognition is that it needs to pass the “can I do it easier?” test. Folks are not going to talk into a remote just for the thrill of it or to impress their friends. It really needs to be easier, add comfort, or add functionality. And it needs to have a failure rate of less than 2% or it gets annoying fast and you put it down for good. Amulet does not yet do this. The problem is, even with simple commands, people’s hands and brains typically work faster and more reliably (even with background noise) than any speech interface, especially with complex media. The other problem is that, as our menu of digital content proliferates, the speech recognition engine has a tough time keeping up and differentiating from minutely different sounding words. And the question one has to ask is, if I have a remote in my hand already, why not just use it to click or scroll around? Several speech devices before Amulet, such as Invoca, have run into this very same wall.

The real Promised Land for speech interfaces, and something we tried at Personica, is a natural language device that can work from across the room, perhaps on a shelf 20 feet away. In that scenario, you don’t need to hold anything in your hand. And, connected to your home’s network, it would be a powerful means, not just for controlling your TV or computer, but also as a conduit for Internet-based information such as news, weather, scores, stock quotes, etc. With the right “attention word” technology, and powerful digital signal processors (DSPs) for noise cancellation and speech recognition, this device could be made today. But again, the devil is in the details and a lot of work would have to be done and experts come together to fine-tune a workable solution that everyday folks would embrace.

There are many, many candidates for this category so far this year. Here are just a few. Evaluation is strictly based on aesthetic beauty and utility of the product’s design. These products could be great, but they have lost an opportunity at “wow appeal” by lacking a cool, sleek, and appealing form factor. 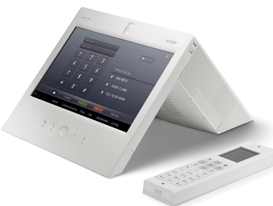 iRiver’s $400 WAVE-HOME is a networked device that allows you to check the web, make VoIP calls, view photos, and watch movies. It has a color LCD touch screen and a camera for video conferencing. While it packs a lot of features at a decent price, they clearly forgot to pay the designer or do focus groups that included Moms. Too bad because iRiver is a great company with lots of other well-designed products (some of which we will take a look at in the future). My wife wouldn’t let this thing near our kitchen.

VuPoint’s PC-C520-VP wins the award for having both an ugly product and an ugly name (which one of the engineers won the foosball match the day it was branded?). It is actually a very useful device since it allows you to easily convert old photos into a range of digital formats. It scans at a high resolution of 2592 x 1800 and uses a 5 Megapixel CMOS sensor. If you have boxes of old photos lying around and you want to capture them before they get too moldy, you might need this ugly device. Just don’t leave it out on the shelf.

Joby's Zivio Bluetooth enabled boom microphone headset is another technical innovation that seems to embrace a geekiness trend which limits its adoption by a wider demographic. The problem is, while other gadget accessories are trying to blend in, be discreet, fit in with your sense of style, this one is going in the opposite direction. Its metallic, angular, design features a telescoping boom microphone to get closer to your mouth, which helps to both reduce background noise and allow you to speak more quietly (don’t you get bothered by the people who shout into their Bluetooth headsets in public areas?). The boom mic also signals to others when you are on the phone, and that you don’t have a significant other who cares how you look.