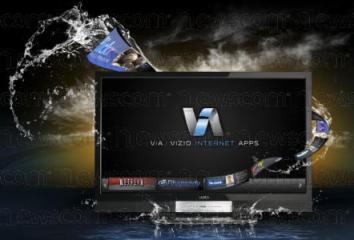 Well, we had been waiting for more details about Vizio’s Internet TV plans, and yesterday they sprang it on us. The leading North American manufacturer of HDTVs has put together an impressive line-up of content and applications for its VIA Connected HDTVs. Vizio had already announced a number of popular content and service providers who are building Vizio Internet Apps (VIA) including Accedo Broadband, Amazon Video On Demand, Blockbuster On Demand, Flickr, Netflix, Pandora and Rhapsody. Now they are expanding the partner list to include more options for entertainment, social networking, and interactive services including:

• eBay (www.ebay.com) — Check your bids and buy other people’s junk without ever getting off the couch.

• Facebook (www.facebook.com) — Putting Facebook on the TV is a great way to get the younger generation back in the living room. Some studies suggest that Generation Z types are happy multi-tasking on their laptops, emailing, IMing, watching DVDs and Hulu, all in the privacy of their bedrooms. They may be about to kick Mom and Dad back off the couch.

• Radiotime (www.radiotime.com) — Don’t like the restrictions of Pandora deciding what you can listen to and how many songs you can skip? Choose from 60,000 AM/FM and Internet radio stations in 140 countries broadcasting in 55 languages.

• Rallypoint Sports (www.rallypoint.tv) — A newly launched service, Rallypoint will allow you to check fantasy sports scores without booting up the PC. Uhhh, I watch every NFL game I can just because I love the athleticism and excitement of the sport… I don’t even really care which team wins… really.

• Showtime (www.sho.com) — Don’t expect to see all the full episodes—Showtime and HBO make too much money from their cable deals. Instead expect “video extras, trailers, trivia, and select sample episodes of hit series such as Dexter and Weeds.”

• Twitter (www.twitter.com) — Jenny has a headache. Bobby missed his flight. Susan is siding with Jon against Kate (plus 8). Alex is rocking back and forth in the corner from the deluge of useless information. Now you know. From the big screen.

• Vudu (www.vudu.com) — I would have to put this at the top of the list for new partners. As we have discussed before, Vudu has the largest HD movie library of all OTT players. Now that they are busting out of their own hardware, expect to see Vudu enabled on more devices like this. Brilliant!

Vizio enables this web-based content via an “easy to navigate, non-intrusive menu” that can be adjusted to fit around the video on your TV screen and a custom universal remote control (supports both Bluetooth and infrared controls with a built-in library of most of the A/V gadgets you might hook up to it) with a built-in QWERTY keyboard that slides open. The VIA™ Connected HDTVs support both integrated wireless (802.11n dual-band with automatic Wifi network discovery) as well as wired Ethernet networking (best if you don’t want to worry about interference).

The really interesting thing about all of this is that TVs are now becoming like computers. With Yahoo!’s Widget Engine and Adobe’s Flash Platform for the Digital Home, TV manufacturers like Vizio will now be able to roll out cool new web-apps without consumers having to trade in their TVs. This will spur a whole new TV Widget development community and likely a war between the HDTV vendors for who can deliver the best apps and user experience. Expect some headaches along the way though. Mainstream consumers will take a while before they adjust to more of a lean-forward viewing experience, pecking away at a keyboard to open apps and enter passwords. Heck, there might even be a bit of a rebellion by TV watching purists that don’t want all that clutter on their big screens. But as one wise analyst soul once told me, “don’t worry, we dinosaurs will eventually die and the kids will take over.” Reassuring words.

Vizio says their VIA Connected HDTV feature will be integrated into the Vizio XVT series shipping this Fall.