ZeeVee’s story is interesting because the company threw out the old rules for getting things done in the consumer electronics AV space. Rather than incrementally building on the existing paradigm by putting yet another set-top-box near the TV, or boiling the ocean by trying to build consensus through standards bodies like MoCA, ZeeVee came up with a completely new way to connect the PC/Internet to your TVs. Their answer: create your own clear QAM cable channel and broadcast it across the coaxial cable wiring that is already in your home-- taking technology that was previously limited to very expensive gear for TV stations and baking it into a lower cost (still not cheap though at $500) consumer electronics device. For the novice, that means ZvBox takes the VGA output of your computer, turns that into a TV channel, sends it over your coax, and allows you to tune it in from any HDTV in your home without any new device in the living room. It comes with an RF remote control that works from across the house and has a touchpad to give you full PC control.

In theory, this approach is the simplest way to harness the full power of the PC and get access to all that the Internet has to offer, overcoming one of the main drawbacks of the “walled garden” approach which limits content and applications. I said “in theory” because the initial reviews were mixed. Folks were a little confused by the value proposition and several reviewers complained that the installation process was too complex (in many cases these complaints were exaggerated but several did come across limitations of the product such as satellite support or outdated PC video card drivers). Like any completely new product category, it takes a while to fully work out the bugs (did anyone read my BlackBerry Storm review?) and it also takes a concerted effort and lots of marketing dollars to educate consumers about the ins and outs of a new approach. Suffice to say, the AV market is still trying to get its collective head around not just the ZvBox, but the best way to consume Internet TV away from the confines of the PC screen.

ZvBox has come a long way since its launch last summer. By all accounts, it is now much easier to install, and folks are beginning to understand that “localcasting” content without having to put boxes near each TV is a huge plus. Of course, there is more competition than when ZeeVee got started, as we recently discussed in our coverage of AppleTV, Belkin’s FlyWire , and SlingCatcher. Not to mention an upcoming onslaught of widget-powered Internet-connected TVs to be launched by the major players this year. But consumers are also another year along in their love affair with Internet video content (according to a new report from SRG over 70% of consumers have watched online TV at some point), making them more likely to look for ways to watch Internet TV in their living rooms without a clutter of new wires and boxes everywhere. 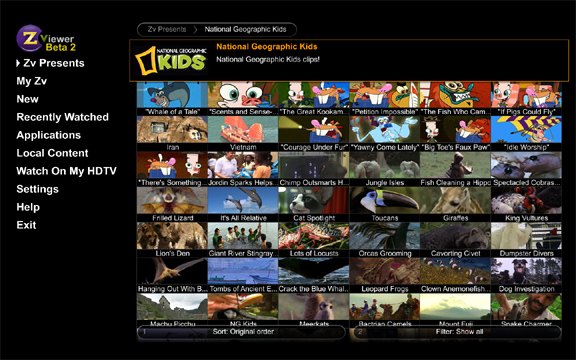 Not content to rest on their ZvBox laurels, ZeeVee has since launched several new products recently and at CES. Last Fall, they launched an Internet TV browser called Zinc that aggregates the best of all the content that is out there (and your local PC content) and allows you to launch it from one central interface. You can watch Hulu, ABC, YouTube, pretty much anything. Zinc is searchable and also has the ability to subscribe to shows to be notified when new content is available. Zinc, and other Internet TV portals such as Boxee, performs a necessary service for consumers who today must click around on dozens of sites to replicate the channel surfing of traditional TV viewing. Zinc can be downloaded from here for free: try it out.

At CES, ZeeVee generated a lot of buzz at their booth with two new products, one targeted at the high-end AV consumer and another at the prosumer/commercial market. ZvPlus overcomes one of the major initial criticisms of ZvBox by adding back the component video inputs that were part of the original design. Now you can turn any AV device in your home (like TiVo) into a QAM channel and replicate it at any coax-connected HDTV in your home (a big money/space/energy saver). I am not sure of the launch status of this product as I don’t see it on their website, but I think I know who to call to get the straight scoop. :-)

The ZvPro 250 is a rack mountable version of ZvBox that has two separate input paths for VGA and component video, supports 1080, 720 or 480 video resolutions (up to 1680x1050 on VGA), and digital and analog audio. It is beyond the reach of most of our everyday Trenders, but I predict the ZvPro will be a big hit with high-end home custom installers and also as a cost-effective method for distributing digital signage for businesses of all types.

All in all, startups like ZeeVee are playing an important role ushering in a new wave of Internet TV adoption. While technology bureaucrats debate various standards and take a wait-and-see approach or dip their feet in the water with limited solutions, companies like ZeeVee are solving consumer problems right now with innovative, and increasingly simplified, devices that give them everything they want.